When it comes to providing all the latest news from Audi and Volkswagen in terms of model launches, concept cars, events, offers, and more, we’re delighted to provide you with regular updates via our news page. This page is updated to reflect the latest happenings across the automotive industry we believe are most pertinent those fans of Audi and Volkswagen.

View the most current stories from our dealership listed below and contact the teams at our Lindale and Kendal dealerships to find out more. We look forward to hearing from you and will do all we can to answer any questions you might have.

Hadwins are thrilled to have attended the Westmorland County Show every year since its inception, and this year was no exception.

We brought a selection of Volkswagen & Audis to the show, and it was our pleasure to meet so many people and four-legged friends at the 2021 show over the two days.

Next year, the show will be taking place over one day, the 8th September - and we'll be there once again.

In partnership with Volkswagen UK, we were pleased to be able to sent Sam Wilson, one of our loyal customers, and his son Toby to yesterday’s UEFA Euro 2020 game to watch England play against Croatia. The game finished 1-0 to England thanks to a Raheem Sterling goal!

Already huge fans of the Golf 8, the all-new R has just arrived at Hadwins Volkswagen. Taking you from 0-62 mph in just 4.7 seconds, the Golf R’s TSI engine produces 320PS with 4Motion all-wheel-drive designed for exhilarating speed and dynamic performance.

As well as impressive power, the Golf R also boasts an imposing exterior with 18-inch Jerez wheels and an interior with quality sports seats and a Digital Cockpit. We LOVE this car!

Your health and safety is our number one priority

The spread of the COVID-19 coronavirus continues to dominate the news and is causing impact around the world. We are monitoring developments closely and connecting with you directly to communicate the precautionary measures we are taking across the Hadwins business to protect the health and safety of both you and our employees.

Following the latest Public Health guidelines from central government and the World Health Organisation, we have put in place enhanced health and hygiene measures across our entire business to ensure you have a safe and enjoyable visit whilst we operate in a safe and responsible manner.

We are still very much open for business and remain committed to providing the very best service we can over the coming weeks. That service includes home demonstrations of our range of cars, be that any new or used models, and our aftersales departments continue to offer a collection and delivery service (subject to availability).

Please don’t hesitate to call, email or drop us a message via social media if you need us.

Thank you for your continued support, your friends at Hadwins Motor Group look forward to seeing you soon.

The new Golf GTD is set to debut at the Geneva Motor Show, which opens to the public from Thursday 5 March to Sunday 15 March.

The GTD is the Golf’s popular, top-of-the-range diesel variant. It combines high performance with maximum efficiency.

It features the cleanest turbo diesel injection (TDI) engine ever to be fitted to a Golf, meaning NOx emissions are significantly lower than its predecessor.

The design of new Golf GTD is charismatic and reflects its dynamism and self-confidence. It features the Golf 8’s fully-digital cockpit, and steps into the future with the press of a button, used to start the engine.

The history of Golf GTD

The first Golf GTD was presented in 1982, in a time where Volkswagen introduced new excitement into the compact class with its turbo diesel. The same dynamic concept is still going strong almost four decades later.

Once again, Volkswagen will introduce its sporty and economical compact model to the market, continuing the trend of increased performance with high fuel economy.

7th February 2020 and our 50th year celebrations certainly started with a bang! An incredible evening hosted by our Head of Business, Paul Crewdson and General Sales Manager, Stephen Ellwood. Our hosts were joined by our supported Ultra Endurance Athlete Dom Ainsley and Professional Motorcycle racer, Christian Iddon. We hope all our guests enjoyed the event as much as we did.

We must pass on particular thanks to Ian Wood of Wood & Co Commercial Photography, the team at J&L Motorcycles and John Hebson from PBM Ducati. And of course every member of the LDA team for their support. 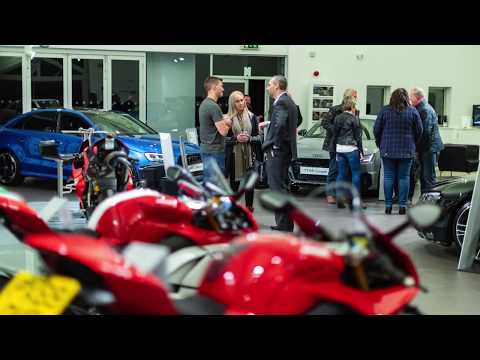 Hadwins (Lindale) Limited is Authorised and Regulated by the Financial Conduct Authority (their registration number is 305708). Permitted activities include advising on and arranging general insurance contracts and acting as a credit broker not a lender. We can introduce you to a limited number of finance providers and do not charge fees for our Consumer Credit services. We may receive a payment(s) or other benefits from finance providers should you decide to enter into an agreement with them. The payment we receive may vary between finance providers and product types. The payment received does not impact the finance rate offered. All finance applications are subject to status, terms and conditions apply, UK residents only, 18’s or over, Guarantees may be required. Where customers using the services of Hadwins( Lindale) Ltd (including Lake District Audi, Hadwins Volkswagen and Hadwins Approved) do not respect the terms of business of Hadwins (Lindale ) Ltd , display rude or aggressive behaviour towards any member of the Hadwins(Lindale ) Ltd team, or make potentially damaging statements on any Social Media platform that may detrimentally affect the reputation of Hadwins(Lindale ) Ltd , Hadwins(Lindale) Ltd reserves the right to withdraw all services from that customer. Registered Companies House: - 00986050 : Address: Charter House, Pittman Way Fulwood, Preston, Lancashire, PR2 9ZD
Saved Vehicles
Back To Top
Back
Vehicle Valuation
Compare Saved Vehicles
Top
Close
X

Required cookies are essential to let you move around the website and use its features, such as accessing secure areas, shopping baskets and online billing. These cookies allow our website to provide services at your request.

Functionality cookies are used to remember the choices you make, e.g. your user name, log in details and language preferences. They also remember any customisations you make to the website to give you enhanced, more personal features.

Targeting cookies collect information about your browsing habits to deliver adverts which are more relevant to you and your interests. They also measure the effectiveness of advertising campaigns.

This site uses cookies and related technologies for site operation, analytics and third party advertising purposes as described in our Privacy and Data Processing Policy. You may choose to consent to our use of these technologies, or further manage your preferences. To opt-out of sharing with third parties information related to these technologies, select "Manage Settings" or submit a Do Not Sell My Personal Information request.